Toi Ohomai Executive to Take up New Role at NZIST 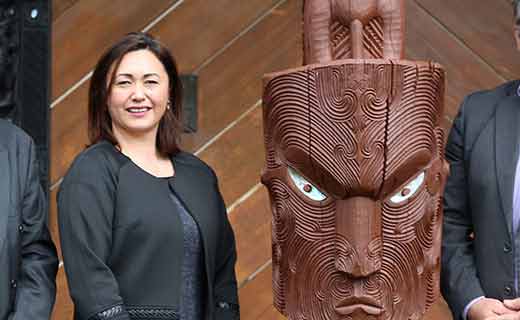 Ana Morrison will be at the forefront of championing Māori learner success as she steps into a new role with New Zealand Institute of Skills and Technology (NZIST).

In April, Toi Ohomai became a subsidiary of NZIST as part of the Reform of Vocational Education.

Ms Morrison will be stepping down from her role as Executive Director – Strategic Partnerships and Māori Success at Toi Ohomai and will take up the new role of Deputy Chief Executive – Partnerships and Equity at NZIST later in the year.

Ms Morrison joined Toi Ohomai three years ago, bringing with her senior leadership and governance experience, coupled with a passion for Māori success and equity.

Toi Ohomai Chief Executive Dr. Leon Fourie said that during her time with the Institute Ms Morrison had significantly shaped the Directorate for Strategic Partnerships and Māori Success.

“She set us up for sector-leading shifts and success and we are hugely indebted to her.”

Dr. Fourie said Toi Ohomai was incredibly proud that Ms Morrison had been appointed into this pivotal NZIST executive role.

“Ana is a wonderful, inspirational role-model for young Māori women, and now she will continue wearing that korowai proudly at a national level.

“It gives me the greatest satisfaction to see that our Te Arawa talent is recognised in this way.

“We are confident that under Ana’s NZIST lead that partnering with iwi, and the Māori learner success story, will be a foundational chapter towards creating real shifts and traction around equity outcomes.”

While she is very much looking forward to her new role, Ms Morrison said she would miss working for Toi Ohomai.

“This new role will be a continuation of the journey I started three years ago when I entered into this sector, inspired by the commitment Toi Ohomai had to Tiriti partnerships, prosperous regional communities, and Māori learner success.

“The Minister of Education and the NZIST Board are committed to equitable outcomes for Māori and Tiriti excellence – both of which resonate with my personal values and leadership intent.”

Her commitment to the Bay of Plenty region remains, and she will continue to be based in Rotorua.

Toi Ohomai Board of Directors Chairperson Catherine Cooney said Ms Morrison’s departure was a huge loss to the Institute but was a coup for Rotorua and Māori education.

Ms Cooney said the Board of Directors sincerely thanked Ms Morrison for her leadership of the partnership with iwi over the past three years.

“We congratulate her on her appointment and offer our whole-hearted support as she leads the NZIST Partnerships and Equity portfolio.”