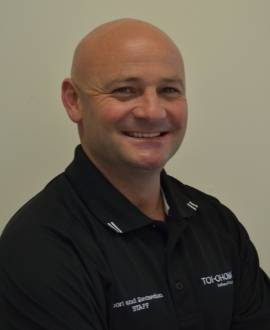 Graduates providing nine years of data guided Kelly Pender through his research examining features of Māori academic success, with an aim to identify how to bridge the gap within the education sector.

Kelly is a Toi Ohomai Institute of Technology Senior Academic Staff Member and Programme Lead for our fitness qualifications.

He loves teaching and supporting his students, and the consistently high completion rates his classes achieve is testimony to the energy and focus he brings on a daily basis. Kelly is one of five Toi Ohomai staff to have won an Ako Aotearoa Tertiary Teaching Excellence (TTE) award, having been an academy member of the national organisation since 2010.

It makes sense then that Kelly study for higher qualifications has drawn on his love of teaching and dedication to advancing Māori kaupapa in education. Once he had completed two undergraduate degrees (a Bachelor of Sport with Massey University, and a Bachelor of Applied Management with the University of Otago), he approached Te Wananga o Awanuiārangi with his academic record, his TTE portfolio and a proposal. Following a panel review, he was accepted as a Professional Doctorate candidate with a study examining features of Māori academic success.

“My kaupapa was based upon how can tertiary teachers do better for our Māori learners. I worked off kaupapa Māori and purakau methodologies and Māori graduates of Cert4fitness over a nine-year timeframe shared their stories.”

He says the annual reappearance of the nine Matariki stars, around June or July, signals the beginning of the Māori New Year. The cluster was a guide for waka and a predictor of good harvests – and so is a great metaphor for learners and learner success.

Kelly was guided by Atu Tahi, an advisory group of nine Māori graduates, and nine focus groups of past and present learners - one from each year of the study’s 2010-2019 timeframe. An online survey provided an additional dataset.

The starting point was a question: why did programme records consistently show no gap between Māori and non-Māori achievement, when this was so different from national statistics, and from other programmes in the same organisation?

Reading and re-reading the transcripts, Kelly was struck by how similar the stories and how rich the data were: even those who had left almost a decade ago recalled their time in the programme in detail.  A five-fold explanation emerged: participants credited their success to the teacher, the teaching, the kaupapa of the programme, the whānau environment created in class, and the collegiality of being part of the Certificate in Fitness fraternity. There were some surprises too. Learners liked the accountability, the high standards and expectations, where “doing average was not good enough”.

During the eight four-day noho marae with his other PhD classmates, which Awanuiārangi facilitated, Kelly shared some of the stories he was hearing and received strong support for his “non-sciency” approach to sharing his findings.

The experience confirmed his commitment to a thesis centred around graduate voice and participant narrative. Wrapping around this, Kelly echoes the calls of other Māori researchers and mentors who have walked this path before him, encouraging teachers to understand the possibilities to build learning through culturally responsive pedagogies within institutionalised structures. As Kelly says, an effective teacher is one who sets their students free by not controlling but empowering, providing tools and belief so that students control their own learning.

Kelly submitted his thesis in November 2019 and his oral defence in March 2020. Had it not been for COVID-19, he would have graduated in April last year.