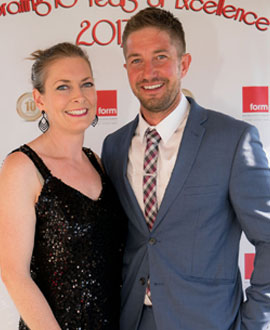 From Ski Fields to Building Sites with Toi Ohomai


After moving to New Zealand from Germany in 2008 to work as a ski instructor, Jens says he eventually realised - with a girlfriend and a life in New Zealand - he wanted to stay here. And he knew he needed a career that would allow him to build a secure future in his adopted country.

“After a while being a ski instructor wasn’t 100 per cent suitable because you can’t really build up. I wanted to have a more stable life.”

Jens says he’s always enjoyed working with his hands and wants to someday build his own home, so carpentry seemed like a good way forward.

“I have always been quite handy and I thought about what I like. What I would like to do is build houses. Looking at my future, I want to buy a house, redo it and start flipping them. My goal is to build houses and then up from there.”

Taking the opportunity, Jens contacted the company and secured himself an apprenticeship. Jens says when he started at Form, his bosses were keen to get him support to complete his apprenticeship through the carpentry course at Toi Ohomai.

He says the company had worked with Toi Ohomai to get many of their apprentices qualified over the years and had a good relationship with the Institute, so he enrolled on the New Zealand Certificate in Carpentry (Level 4).

Students complete the course through block courses or night classes while working as apprentices, which allows them to learn the theoretical knowledge they need while gaining real-life experience on building sites.

Jens says he did his learning through block courses and loved it because it provided him with the opportunity to share his experience with his classmates and acquire new knowledge.

“It’s been really good being at Toi Ohomai because I could go there and ask as many questions as I wanted because we were all there to learn. I also got a different perspective because sometimes the tutors would show stuff from overseas and we looked at other types of houses and practices. We even watched videos from Germany.”

In his final year of his apprenticeship, and the course, Jens says he wants to work towards becoming a site manager once he’s qualified.

He says he’s also pretty keen to try house-flipping on the side.

“If I can buy a house and do it up, then I can flip it and move on to the next one. Hopefully I can do that while I’m also working as a builder.”