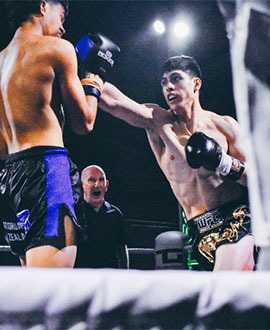 
Martial arts fighter Zaane Walker wants to turn his sport into a career and he’s grateful for the Toi Ohomai Institute of Technology scholarships that are supporting his goal.

The two-time Under-18 New Zealand Muay Thai champion earned a $5000 High Performance Sports Academy scholarship and a $1000 Study Award when he enrolled in his diploma course at Toi Ohomai earlier this year.

Zaane’s pursuing a career that first opened up when he decided to leave school at the end of Year 11.

“My mother presented an opportunity that would set me in the direction I desired. I was offered a place on the Level 4 Cert4Fitness at Toi Ohomai, which opened my eyes to the sporting industry. Although it was challenging, it showed me I had potential.”

The 18-year-old, of Tūhoe and Ngāti Porou descent, has more recently been catching a free bus from Whakatāne to Rotorua to attend his New Zealand Diploma in Sport, Recreation and Exercise (Level 5) classes.

He fits his training around his studies and has his sights set on competing at the Muay Thai Oceania Championships in the Gold Coast next year, and eventually the Olympics.

Zaane began Muay Thai fighting nine years ago and his greatest achievement has been the gold medal he won at a 2018 tournament in Thailand.

“I do this sport because it has given me a chance to learn about myself and build strong characteristics that make me who I am. It has taught me discipline, equality and respect for everyone. It challenges you physically and mentally in ways I cannot even describe - I love it!”

He provides personal training for two clients and also works for a disability organisation. He describes the scholarships as a “major blessing” which will allow him to graduate without a student loan.

Zaane’s intending to expand his training services and, when he retires from top-level competition, to eventually invest in his own gym hosting a range of practitioners providing high performance Mixed Martial Arts (MMA) training.