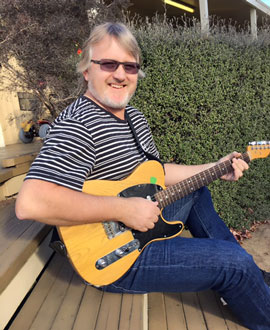 Dave is a Research Coordinator and music tutor at Toi Ohomai. He's also a New Zealand singer-songwriter and music educator with a contemporary performance and recording history of over 30 years.

Dave is actively involved in the music industry and has contributed to ten commercial musical releases, both as a band member and a solo musician.

He holds a Master of Art in songwriting from Wintec and is passionate about sharing his love of music and lyrics with students and audiences.

Some of his recent musical releases include “Beginner’s Mind” (2017), which was released as part of his continuing work towards a doctorate in musical arts. He also released a solo original EP “Hard Work” in 2014 and an original solo album “Fold in Two” in 2008.

Dave enjoys family life in the Bay of Plenty with his wife, two teenage sons and extended family. He enjoys performing live music and finds balance by regularly practicing yoga and meditation.