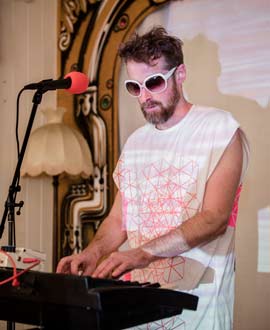 Kyle teaches visual arts, design and creative technologies at Toi Ohomai. He's a multimedia artist and musician with a Master of Visual Art from Wintec.

His recent work has focused primarily on sound and video as well as exploring the influence of rhythm and flow on the human experience.

He has a keen interest in alternative music and live music and currently provides sound work for local and touring bands at The Jam Factory in Tauranga and actively write, record and perform his own music for ‘We Will Ride Fast’, who will be releasing a third album in early 2021.

He's spent the past 25 years building a career as a practicing artist and musician, completing several private and public artworks. He's also released more than 30 albums as either a solo artist or as part of various groups, as well as winning a number of industry awards, including the National Contemporary Art Award People’s Choice Award in 2018 and the Supreme Award for Adult Educator in the Bay of Plenty Region in 2018.

When he's not in his element, he's kept busy with young kids and keeps himself updated in ancient history and architecture.