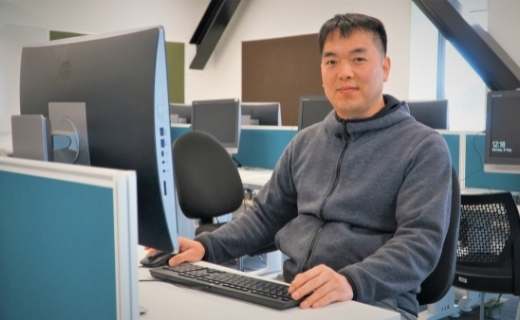 Toi Ohomai Institute of Technology staff now have important stats at their fingertips.

The organisation uses Te Ao Mārama as a dashboard tool, but it was only accessible on a laptop or desktop computer.

In a bid to make information more accessible to staff when they are off-campus, the organisation’s Business Insights team enlisted support from the Faculty of Business, Design and Service Industries to find a student to help them.

Toi Ohomai staff that are out and about at schools, employer workspaces, or with colleagues can access information such as up to date student numbers, amount of qualifications awarded, or application and demand.

Jay is majoring in software development and hopes to work as a web developer after finishing the course.

“I found the project with the business insight team more interesting in many ways. The scope and the role of the project seemed very clear, and the project management tool they used was a popular one, so I applied to join the project.”

He says one of the challenging aspects of the project was getting familiar with new technology.

“Even though I spent some time studying the tech stack during the summer break prior to the project, I sometimes got stuck during the early stage of the project and it took some time to get used to working and communicating using the platform the team used.”

Jay says he gained valuable insight into completing a project for a big organisation.

“The team is very well organized and they have the resource and platform they need to do the project. Each team member has expertise in their role so that the help I needed was always available. The project was managed so smoothly and I saw what I had learnt from the class applied to the real project.

“When considering the size of the organization and the user base of the service, I felt a bit pressured, but it helped me to concentrate on the project.”

A highlight for Jay was experiencing and participating in the collaboration and communication as part of the team.

“It was really great to learn how they managed the project and cooperated in a way well recognized in the industry.”

Business Insights Manager Stephen Porteners says the mobile functionality was developed as part of Jay’s industry project paper, which gave him the opportunity to not only gain valuable hands-on experience but also to see his hard work in action as the app is rolled out.

"Working with Jay has been a win-win for us. We've been able to give Jay experience that meets his academic demands and deliver a product of value to Toi Ohomai."