New Vlogging and Podcasting Studio for Next Generation of Content Creators 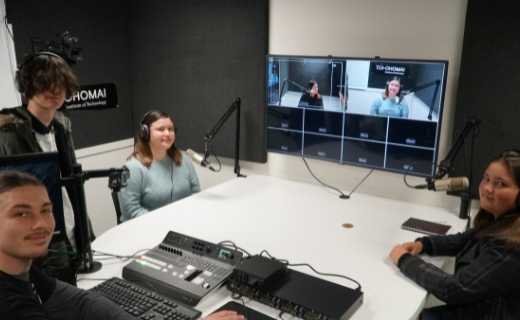 With the use of online media ever-increasing, a new intake of communications media students will harness a new video studio to kick-start their careers.

Toi Ohomai Institute of Technology has created a vlogging and podcasting studio at its Windermere campus to emulate a professional studio experience for its students.

The upgrade means vlogging and podcasting are now included as part of the New Zealand Certificate in Communications Media (Level 4) course at Toi Ohomai. The tertiary provider is also considering offering the studio to other community users in the future.

Ruben Pargeter recently started the one-semester course and aspires to have a career as an online personality.

“With this ever-evolving technological world we live in, having such resources like this at our disposal is a huge advantage.”

Ruben says the opportunity to learn and get experience in the specially designed studio is invaluable, giving him and his fellow students the real skills needed in an already busy online media world.

“In this day and age, content needs to be something that stands out from the crowd and it has to grab the viewers’ attention, and learning those skills here will be great.”

Fellow student Kanye Edwards has already set up her own YouTube channel and wants to learn the skills to make more content.

“I was previously studying art and someone suggested this course to me. I didn’t think much about it at first, but when I actually looked at what was on offer I realised it was stuff I was interested in.

“I had already set up my YouTube channel, but have only posted one video. I want to start posting more and this will give me the motivation and the skills to do that.”

Tutor Damian Lunson was instrumental in setting up the studio, which previously hosted an on-campus radio station.

“We had a small number of listeners and radio has moved into a mixed mode of delivery, which we were not interested in replicating. The podcast studio allows us to both livestream and also do offline recordings with a professional set up.”

Tutor Adrian Maidment says it’s crucial to include vlogging and podcasting in the course because it’s the way the industry is moving.

“Businesses are focusing on this type of content. This studio gives the students practical experience that simulates a professional business set up.”

The studio is set up to enable users to simulcast to multiple platforms at the same time, such as YouTube, Facebook and Twitch.

“We will also look at opening the studio up to the wider community who have a need to create this type of content,” Adrian says.