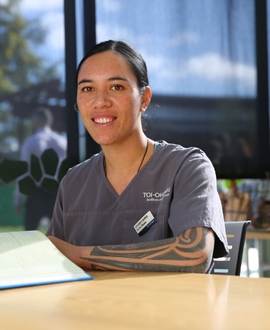 Te Au Waaka wants to be able to take care of her whānau and those in her community.

The Toi Ohomai student is in the second year of her Nursing degree and was one of the recipients of the inaugural Whakapumau Pae Tawhiti - Retention Scholarships.

Te Au knew she wanted to study close to home and despite her first option of midwifery not being available, she chose to pursue a career in nursing and hasn’t looked back.

“The more I thought about it, the more I realised that nursing was the right choice for me.”

The former Rotorua Girls’ High School student is of Te Arawa and Tainui descent and says her whakapapa is a huge part of her career aspirations.

She says she was encouraged to apply for the scholarship by a tutor and was shocked to hear that she was a successful recipient.

The Whakapumau Pae Tawhiti - Retention Scholarships are open to current Toi Ohomai students, with the aim of encouraging the retention of Māori, Pacific, and learners with disabilities into higher levels of tertiary study at Toi Ohomai.

This recognises that graduates of higher-level tertiary education programmes play an important role in supporting the economic and social wellbeing and prosperity of their communities and whānau.

Learners completing higher-level qualifications not only contribute valuable skills and knowledge to our region and Aotearoa New Zealand but also provide essential role models for educational success to future students and their whānau.

The scholarship money has helped Te Au with course books and the uniform required for her studies.

“I have also used it to pay for an online mindset course which has really helped me to focus and succeed.

“It has helped me with my confidence and pushing past my limiting beliefs.”

Te Au has two young children who keep her motivated to succeed.

“I want them to see me achieve my dreams and set a good example for them.”

Te Au was also the successful recipient of a recent research scholarship, in which she was interviewing kuia about what Māori success looked like to them.

“It has been really grounding and interesting and I have been able to apply my findings to my nursing.”

Te Au says her nursing degree is challenging, but with whānau support, it is achievable.

“If you want to study nursing, you need to be prepared and have good time management. Whānau support is the biggest thing, and it will get you through.”